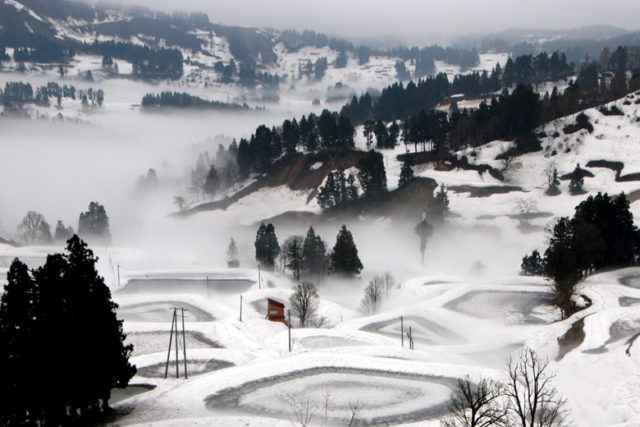 Yamakoshi is surrounded by mountains on steep slopes on every side, and there are so many snows that can not be believed.
Among those who visited this place for the first time, there are not many people who think, “Why did people think that people would live in the mountains like this?”
However, this life in the mountains has brought up Yamakoshi’s own culture.

For Yamakoshi people, “mountain” is not simply a term pointing to the topography, it is a field, it is a forest that burns charcoal and it is also a source of water to get water.
The mountain is all of the place of production, and the old man seems to have worked “hard work, debt and bought a mountain (about rice field)”.
In the end of the Edo period, sericulture such as rice, millet and rice, sericulture, wild vegetables, wood and firewood are recorded as Yamakoshi’s property. In addition, shrinkage (woven in winter) and summer silkworms were bought by merchants, and if snow disappeared, they were selling wild vegetables, soybeans, roses, charcoal and bushes to Nagaoka Castle.

Rice paddy fields that were made by cutting open the mountains are the characteristic scenery of Yamakoshi.
It was quite hard work to machine the rice terraces where the ascending and descending are strong.
So, it was a cow that was a strong partner for people.
Cows with strong legs and withstanding cold and coarse foods have long been valuable workers for transportation and agriculture.
“bullfighting” that started only because there were cattle living together is a prideful event for the people of Yamakoshi.
Because it is an agricultural cow, we practice to draw so that cattle will not get hurt.
Men called Musume got in between, hold down the cow and draw a match.
In the past, it was said that young people in the village managed to handle all the preparations, proceedings, and cleanups of the event, and it was accepted as a single person by completing the horn stab.

Nishikigoi was also born in Yamakoshi’s nature and the lives of people.
In snowy but poor mountainous areas, we built reservoirs at the top of the rice paddies and secured water for rice cultivation.
So, mutant caused a carp with color from carp that raised carp as edible.
It is now “Nishikigoi” which became one of Yamakoshi’s traditional industries.
It is said to be “swimming jewel” because it is captivated by colorful Nishikigoi such as “red and white” which shines red on white skin and “gold and silver scales” like golden silver scales.

Traditions such as “bullfighting” and “Nishikigoi” are pride for the people of Yamakoshi, created by people living in this area.
In the heavy snow, I patiently waited for spring, kept tradition and succeeded, it became rooted in my life, it became indispensable thing.

Even now the times have changed, the people of Yamakoshi are facing nature, keeping the pride of tradition, living while treating the days unreasonably.