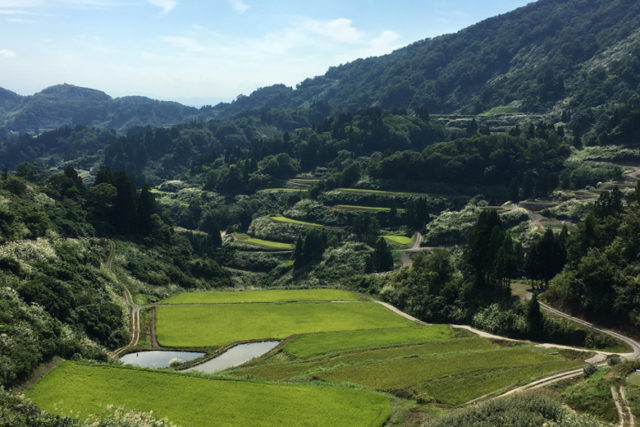 There are few flat lanes in Yamakoshi, and villages are divided into 16 in the valleys of the mountains and the villages are dotted.
This natural disaster broke down the mountain in an area where landslide has long since lived, became a place on a gentle plateau, and made a terrain that was easy to open up terraced fields and rice terraces.
Every time landslides occurred people maintained the land and increased paddy fields.

The paddy field area of ​​Yamakoshi has dramatically increased from the end of the Edo period to the Taisho era.
When we reaped the rice in the fall, we scraped the slopes of the mountain side, expanded the Yamate side of the paddy fields, and further extended the slope of the Tanigawa to spread the paddy field.
The more you can plant seedlings, the more harvest it will be.
Therefore, at the time it is said that the paddy field was expanded with the family’s total.

Paddy fields overlapping the mountain slope in a staircase pattern are called rice terraces, and cedar is planted in places in some places.
The predecessors left natural forests near the top of the mountain and near the valley,
In the rice paddies group, we created a landscape with cedar forests.
Rather than forcibly pioneering nature by the power of human beings,
It tells us that we have only added the necessary parts naturally.

Current Yamakoshi can be accessed by driving from JR Nagaoka station for only 30 minutes by car.
However, for Yamakoshi in the mountains, the bad weather of transportation was a problem for a long time.
Once the way was not good, we also had to carry all the daily necessities such as salt and rice and cocoon shipped from Yamakoshi on the back.
Especially troubled is a doctor, it seems that it was difficult to carry sick people and doctors, and many people died.
It is also one of the world’s heaviest snowfall areas, with many dangers such as avalanches and snowstorms accompanied by overpasses in the winter.
There are a lot of small hand digging tunnels left in such Yamakoshi.
These are villagers who wish to secure a way to get out of town as soon as possible, the way that has opened up in the long history.

Currently Yamakoshi can also see rice terraces and tunnels, which symbolize coexistence with the mountains. It is a land of this harsh natural environment, a proof that the predecessors fought mountains, lived with the mountains, and lived.
Among the people of Yamakoshi who aimed for rebuilding without giving up even after the earthquake, its history is still inherited.